I’ll show you how to make this easy, slow cooker Jambalaya Recipe. It’s really easy to make and healthy. I’ve got the ingredients assembled here. 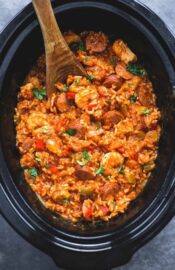 Optional: If you want, the recipe doesn’t call for it, you could probably brown these Chorizo bites or the sausage chunks in a frying pan. First, if you wanted to, it might give it a little bit more flavor. It might also help cook some of the fat off. I’m not too worried about that.

How To Make Delicious Jambalaya In Slow Cooker

Dump all the ingredients in the slow cooker, except the cauliflower and shrimp. Those will be added in the end.

Cook it on low for about four to six hours and about half an hour before you want to eat is when we’re going to put in the rest of the ingredients.

Okay. So this is going to go on low now. Of course, we’ll come back in four to six hours. So after 4.5 hours, I’m just going to open this up and give it a quick stir. The smell is amazing.

And now we’re going to add our shrimp or prawns and our cauliflower rice. Cover the slow cooker and cook it for another half hour.

After 30 to 35 minutes open the cover and check if the prawn has cooked well. If yes then it is ready to serve.

So there you have it. Slow cooker jambalaya and this is a low carb version using cauliflower rice. Instead of rice, give this a try. It’s tasty.

Did you make this recipe?

Ketorecipeshop.com is a participant in the Amazon Services LLC Associates Program, an affiliate advertising program designed to provide a means for sites to earn advertising fees by advertising and linking to Amazon.com, Amazon.co.uk & other affiliate programs.